As many of our blog’s avid readers know, pineapples have a longer history than most people are aware of. We’ve previously mentioned how the pineapple’s arrival into society slowly gave way to its long-position as a status symbol. Shining gold and tasting like pure heaven, it’s no surprise that this strange fruit from the New World eventually became a prized possession among the wealthy and elite of Renaissance-era Europe.  (For a fuller explanation on the subject, visit our previous post “A Brief History of Pineapple Exports” here.)

However, one thing we have never mentioned – and is something I only became aware of recently – was just HOW MUCH pineapples were coveted during the high times of royal and aristocratic affairs, even centuries after its initial introduction. 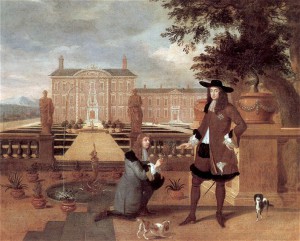 A seventeenth-century painting of King Charles II receiving the first pineapple ever to be grown in Britain from his gardener. The depiction of the scene is a reflection of just how important an event it was.

It was celebrated so much so, in fact, that if you were hosting a worthy soiree, you would inquiry about RENTING a pineapple for the night and show it off to all of your most valued guests.

Don’t believe us, check out the rest of the story here at FoodBeast.com.

This entry was posted in Featured, Tips & Tall Tales. Bookmark the permalink.