A Savory and Sweet Easter Tradition

With deviled eggs as the opening act, pineapple ham is the main event at Easter dinner. Juicy, sweet and festive, pineapple and ham join forces to make an iconic holiday dish. Have you ever stopped to wonder – why ham? Just like turkey on Thanksgiving, ham and Easter tend to go hand-in-hand. As it turns out, there’s a bit of history behind this tradition. 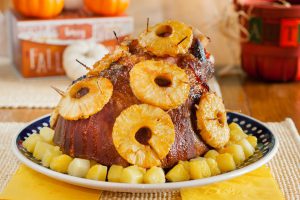 How the Easter Ham Began

Historically, pigs were slaughtered in the fall, when chilly temperatures kept meat fresh during the several days it took to prepare the hog. (It’s also believed that pigs would graze on acorns and insect-free grass in these later months, making the ham ultimately taste better.) The ham would then be cured over winter and ready to eat by the time spring arrived.

Pineapple and Ham: An Unlikely Marriage

With colorful eggs, marshmallow chicks and molds of gelatin – not all Easter food make culinary sense. However, the unlikely duo of pineapple and ham transcends strange food for the sake of tradition and instead creates an iconic and delicious plate. Juices from the roasted pineapple neutralize the cured ham’s saltiness, making a dish that delights the tastebuds. This begs the question, who was the first to make it?

While the discovery of pineapple dates back to Christopher Colombus, it took a couple of hundred years for the prickly fruit to truly arrive on the scene. At first, because they are limited to a tropical climate, pineapples were a rarity only obtained by the upper class. However, the Royal Fruit was “dethroned” in the 1800s when canning came onto the scene. Canned produce allowed for once-scarce tropical luxuries to enter middle-class households.

To promote pineapples on the average grocery list, companies took out ads in women’s magazines and printed recipe booklets. A 1925 recipe booklet featured the headline “99 Tempting Pineapple Treats.” In its page’s Americans discovered a recipe for baked ham with pineapple- the earliest published recipe of our favorite Easter dish.

Check out our Pineapple Ham recipe and other Easter treats in our Ultimate Easter Recipe Round Up!